In 2015, my colleague Martin Thomas and me have developed and published the Voronoi integration technique. This method applies a periodic radical Voronoi tessellation in three-dimensional space to the atom positions, and subsequently integrates the total electron density within each molecule's Voronoi cell to obtain molecular electromagnetic moments such as the electric dipole vector or the electric quadrupole tensor. These quantities are required to compute vibrational spectra from ab initio molecular dynamics simulations, as we have demonstrated for infrared, Raman, VCD, ROA, and resonance Raman spectra.

Based on the radical Voronoi tessellation, we have developed a method for computing optimized atomic partial charges (“Voronoi charges”) from AIMD. The radii are optimized on-the-fly to minimize the molecular and atomic charge fluctuations, so that the approach does not possess any empirical parameters and yields a rigorous definition of atomic charges in the condensed phase.

The Voronoi tessellation is based on the Voro++ library which was written by Chris Rycroft.

Since the article was published in 2015, the Voronoi integration technique is implemented in the TRAVIS program package. TRAVIS can read Cube files with the total electron density of the system, and subsequently perform the Voronoi integration to obtain molecular electromagnetic moments and compute vibrational spectra. There is also a step-by-step tutorial available which shows how to compute bulk phase vibrational spectra with TRAVIS and CP2k.

During my guest visit at the University of Zurich, I have implemented the Voronoi integration method directly into the CP2k program package. Starting from CP2k release 8.1 (December 2020), it is possible to directly compute the electromagnetic moments during a CP2k simulation without having to output the total electron density in every step. An updated version of the tutorial will follow soon.

To show the power of our new method, we will compare it to the standard approach for computing molecular dipole moments in condensed phase systems, which is the Wannier localization, which leads to maximally localized Wannier functions (MLWFs): 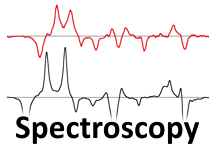